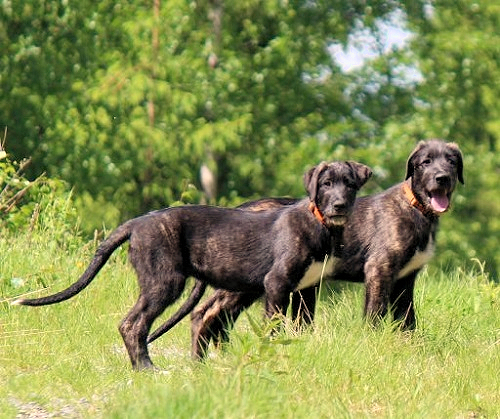 The prefix was approved in Norway (NKK) in 1992 and year 2000 in Sweden. Our breeding started with the Irish Wolfhound Ulvegårdens Diamond Duchess, who had 2 litters; by Nellwyns Mastermind, then by multi Ch Maeveriks Zippy Zodiac. In 1996 a new bitchline was introduced, in the fawn swedish import Norw. CH Wolf Tone Millicent. She also had 2 litters, being bred to Ch Tenderfoot of Kilmara and later to Ch Wolf Tone Xerces at Westmount. Gruagach has bred on with offspring going back to her litter by Tenderfoot. In 2004 another new bitchline was introduced, in uk import Seplecur Marlena. She also had two litter, being bred to CH Fey Faeton At Gruagach and CH Rysheron’s Frankie D At Sapwoods. Our latest litter (2013) was out of Gruagach Kern Meander daughter of CH Rysheron’s Frankie D At Sapwoods and Seplecur Marlena – she was inseminated with frozen semen of INT NO SE CH Solstrand Qvist and we got five beautiful pups. Two of them staying at our home, Gruagach Miracle MaxX and Mindy.
Our most well known hounds is Swed CH Fey Faeton at Gruagach [otto] and Swed Norw CH SW-07 Nordic W-07 Conchobar Fauno [pedro] who is behind many pedigrees of winning hounds around the world today. We do not breed Irish Wolfhounds today.

The first Greyhound litter was in 2004 out of Telegram Twist’N Turn sired by Multi Ch Sobers Cadiac and in 2007 the 2 generation was born out of Norw CH Gruagach Autumn Darkness sired by Nordic CH Another Story New Kid In Town. We do not breed Greyhounds today.

There is more information about Gruagach breeding in the link [ history » ]